Farewell to the graduating seniors

Posted on May 8, 2019 by Southern News Leave a comment

I never thought I would work for a newspaper in any capacity, let alone work my way up to Editor-in-Chief of that very publication. However, it was one of the best decisions and accomplishments during my four years at Southern.

Coming to Southern, fresh out of high school I really wasn’t sure what career path I wanted to pursue. I started out as a business marketing major and it was not until junior year that I made the switch to journalism.

I was confident in my writing skills and wanted to develop them even more but it was my passion for sports that lead me to my involvement in the campus newspaper.

A couple steps too slow and about 20 pounds too skinny, it was evident I wasn’t getting drafted by the Dallas Cowboys. However, getting paid to watch, write and talk about sports? That just might be the next best thing.

In the past two years, I attended practices, covered countless games and wrote numerous profiles. However, it wasn’t being around sports that made the job so rewarding. It was the people.

The coaches, athletes and many other students, faculty and administrators that I have had the opportunity to meet and speak with through my multiple positions at the Southern News is truly remarkable. Everyone has a story, and being able to help tell the stories of others is one of my favorite perks of journalism.

I wouldn’t be where I am today without the help and guidance from my professors. Southern News advisors Prof. Simoneau and Prof. Harris were mentors to me. They taught me how to be a better writer and reporter but it went beyond that too. They were role models and examples of how to act as a professional and navigate through the field of journalism and the much larger field of life.

Grateful for my time in student media
Michael Riccio—Managing Editor 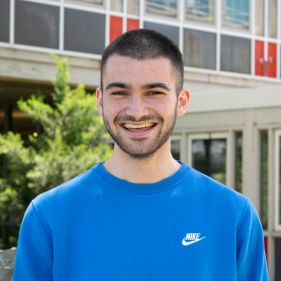 Heading into college, I had no clue what I wanted to do. I did not even want to go to college after high school. I did not declare to be a journalism major until November of my sophomore year. However, I learned during my four years at Southern that it is okay to not have everything figured out and planned for you.

I joined the radio station, WSIN, during my first week of freshman year because I wanted a show talking about sports. During my first show, I met Quinn O’Neill, who became one of my closest friends. We did a show together every week for three years and broadcasted numerous football games, men’s and women’s basketball games and baseball games for four years. Broadcasting games with Quinn and talking about sports with him on air is really what got me more and more interested in journalism.

Before junior year, Prof. Jodie Gil encouraged me to write for the sports section of the newspaper. I was unsure about it at first, but it turned out to be the best decision I made. I was just contributing during junior year, but Kevin Crompton said to apply for the Sports Editor position for my senior year. Through writing and working with him, Kevin became one of my closest friends as well, and I would not have become good friends with him or Quinn if I did not join either clubs.

One of my favorite stories at Southern came while I was Sports Editor. The football team lost on Senior Day 24-13 to undefeated LIU Post, but were losing by only four points with eight minutes to go. After the game, head coach Tom Godek told me how much he appreciated an article I wrote about running back Eli Parks, how professionally written it was and wished “there was more articles written like that.”

I was surprised to hear him say that, especially after losing the final home game of the season to a nationally ranked team, but it meant so much to me. It showed me people on campus were reading some of my articles and cared about them and assured me that maybe I can actually do this after graduating college.

Becoming Managing Editor for the spring semester was my proudest moment during my four years here. It was something else that happened during college that I never had planned out for myself.

I owe a lot to Prof. Simoneau and Prof. Harris as well. They held me to a high standard during my time as a student and editor, and it made me want to put my best work forward and made it feel like the work done in the classroom and newsroom is important.

If in high school, someone told me I would be broadcasting games over the campus radio station, I would be Sports Editor, then Managing Editor, of the campus newspaper or even graduate school in four years, I would not have believed it. I still do not know what I am going to do after graduation. However, being a journalism major and a part of the campus media has taught me it is okay not knowing what is going to happen, and it has given me confidence where I know I am going to figure it out.

The so called enemy of the people
Victoria Bresnahan—News Editor

As a journalist, my job is to write the news via the words of other people. I question those words, constantly, to make sure they are truthful. If written well enough, a story can

I have interviewed rape survivors, students thriving despite having Cerebral Palsy, students who spoke out when professors used the n-word, a mass shooting survivor and many more. In addition, the small handful of administrators and faculty members who have spoken candidly with me about university issues has always been appreciated. Their words transformed me into someone who found their own voice again and felt confident enough to take charge.

I have made mistakes throughout my time here. I am my hardest critic and I spent many nights going over and over again in my head the errors I made. Those mistakes, however, have made me into the hardest working person I know. I thank the Southern News advisors Cindy Simoneau and Frank Harris and the other journalism professors for always holding my feet to the fire whether it be in class or at the newspaper.

When people silence, ignore or threaten press rights they are silencing, ignoring and threatening their rights to obtain information.

This should be a concern of everyone. I recently had an interview with President Joe Bertolino about minority retention rates and the efforts the university is making to increase it. He told me that if the university is going to use words like social justice university then they have to roll up their sleeves and make it that way. How powerful.

In our own way, I think the Southern News has also rolled up their sleeves. We are committed to social justice by writing about the issues that affect the student body. I am not the university’s enemy. I do not write to promote or dismantle this university. I write about it, constantly, in the hopes that some form of change will happen on this campus. I am a journalist first, but behind the title of news editor lies a student like everyone else. When I was laughed at for asking a question, I did not just remember that as a journalist but also as a student. When my own personal life story was ridiculed, I remembered it not just as a journalist but as a student.

During my time at the Southern News, I have taken great pride in my work. I have greatly enjoyed the moments of laughter and triumphs in the newsroom. Those are the memories that will stay with me the most as I move on to the next chapter of my life. For me, journalism is one of the ultimate ways to provide justice to those who have been silenced. I hope that during my small time at the newspaper, I have done just that.

Roll those sleeves up high. The Southern News will be watching.

It was five years ago that I decided I would spend my life working as an acoustician. Having been accepted into the only undergraduate acoustical engineering program in

the country, I was prepared; eager.

The universe has a complex way of leading those to what they really want. Some force in the ether grabbed me away from ones and zeros, and dropped me into the world of art, language and truth—and it drug me through the dirt along the way.

One year, eight months and nine days ago—I had transferred to Southern already and abandoned math and science to pursue an infatuation for writing and reporting—I wrote my first news article.

Straight into the deep end I went, being scrutinized for a marginal writing mistake.

“This error, in particular, will cause havoc in our office,” an administrator wrote.

I knew from then this field is no joke. No other students on campus received so much backlash and disgust for enduring an educational process. Students who frequent Morrill Hall, floor two, are some of the only whose work is audited publicly with a fine-tooth comb. Just learning, yet still rebuked.

No matter, I decided.

I could take the heat.

Unfazed by the global growing distrust of media. I have spent these three years falling desperately in love with the life of the press. Hard news, feature news, photojournalism, I could not get enough.

Being unafraid to ask the tough questions, un-intimidated to photograph world-famous figures and unencumbered by a lead that required digging has made me the reporter I am. The effect is clear. Reporters have the opportunity to give a voice to the voiceless. Reporters share the spotlight with individuals who were blind to it prior.

We also tell the whole truth: the truth some do not want told. Quick thinking in those cases meant, at times, this student-run newspaper beat local, professional reporters to statewide stories.

That confidence, that tenacity, did not come free, and it did not come easy. I studied great journalists before me, trying to achieve at their level of professionalism.

Motivation came at the end of long nights, in Adanti Student Center room 225. That is where I have grown since August 2017. I hold the newsroom close to my heart, and leave it in the kind hands of those to come.

I commute from almost 40 minutes away, and I can confidently say I spend more time in the newsroom, most days, than I do at home. When I walk back into the newsroom after a late event, or when I first arrive here in the mornings, I feel at home. My fellow editors are like roommates.

The summer after high school, I moved into a dorm room. This month, I move out of room 225.