I’ve been a commuter for about six semesters at Southern, so you can say I’ve mastered the art of being a commuter. One of the benefits of commuting to school versus living is how affordable it is. However, when I did decide to commute, no one told me about the hidden expenses of commuting.

Commuting to and from school can add up in many ways. First, let’s add up how much it costs to get here. For many, it’s by car. Cars can be expensive, especially when you factor in gas, insurance and other maintenance fees (such as oil changes, fixing the occasional ailments and tire rotation). Depending on the person and the car, this can cost up to $200 a month.

For those of you who choose to take the train to school, those train rides can add up. However, according to the Metro North website, you can do several things to offset the cost. For example, you can ride the train during the off peak hours which saves you a grand total of 25 percent. If you can’t do that, Metro North has you covered with their multiple ride tickets. Even though it’s a bit less convenient than if you were driving.

Now that you’re at school, you’re probably there for a longer period of time. Unlike residents, you don’t have the luxury of going to a dorm between classes (this is why some commuters have classes back to back). 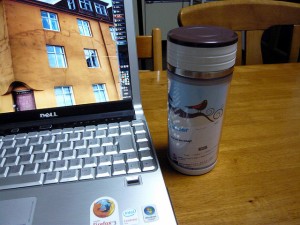 Spend your break catching up on homework and save money buy bringing coffee from home in a tumbler.

Be warned though. It adds up quickly, especially if you’re doing it regularly. Let’s just say that you buy yourself a medium cup of hot Dunkin coffee two or three times a week. The cup of coffee costs $2.19 and if I bought it three times a week then it would cost you about $6.50 a week.

Since I’m here for stretches of time, I have two options. I can either bring food, or buy something from the Student Center or Engleman. The other option is that I can bring my own food from home. Obviously, bringing the food from home is a more inexpensive and less frustrating option than braving the lines at Mondo’s.

However, since I often leave my house early in the morning, making sure that I have enough to eat often is one of my last priorities. I am also carrying books and notebooks for all of my classes, so by the time I can fit in food, I’m often out of room for a sandwich. Needless to say, I often make the trip to Mondo’s, Dunkin or Blue Agave.

With all of this money that we spend buying food and getting here, you must think that there’s no way for me to cut back? After all, you need to eat, and you surely need to get here. But, there are a few tips on how to save some cash.

The first is try to buy whatever food you need at your local grocery store. A way to ensure further savings is to get a club card. This can ensure a few extra dollars in your pocket because sometimes these cards can save you a little extra. For example, Big Y’s Express Savings Card.

A big savings in my opinion is to get your coffee at home. If you have a Keurig or other coffeemaker, it’s a lot cheaper to get the K-Cups since you pay for about a week and a half’s worth for only seven dollars. Many stores even have them on sale for less.

Another way to save some money is to try to carpool whenever you can. If you have a friend that goes to Southern as well and has a similar schedule, try alternating driving schedules. One day they can drive. The other you can drive. This may not work for everyone, but it’s something to consider.

Even though a lot of these expenses are unavoidable, there are some ways to commute smartly and less expensively.