Posted on November 14, 2018 by Southern News Leave a comment

For the first time in school history, the men’s cross country team won the NE10 Championship, defeating Stonehill, American International, Southern New Hampshire and Merrimack in the top five for the team’s second straight first place finish and their first of the postseason.

“We knew going in we had a shot to do really well,” assistant cross country and track and field coach Brian Nill said. “We kind of thought we were gonna be second or third but guys just never slowed down and we kept passing guys and passing guys.”

“We were controlled for the first part but then we just picked people off,” Lebeau said. “We all ran the best we could and results came with it because our fourth and fifth were a lot closer to our first, second and third, so that’s what gave us the edge at the end. Stonehill and AIC have some very good runners but we as a team were the closest packed together and that helped us get the lowest score.”

“I’m the only person graduating from this squad, Cugini said. “The team’s young and they’re doing so well. They’re going to be doing just as well next year and hopefully the year after that, as well. We’re all working together and it’s more of a cohesive effort than it was in the past.”

The team, aiming to qualify for NCAA Nationals Dec. 2 in Slippery Rock, Pa., will have to finish in the top three at Saturday’s East Regional meet for an automatic qualifier, otherwise, they will need to hope their credentials are enough to claim an at-large bid.

“The thing that’s nice about the regional meet is you can enter up to 10 guys and then the night before you declare which seven you’re gonna run,” Nill said. 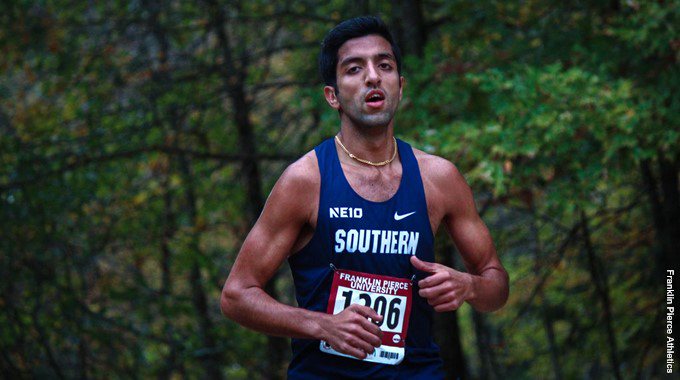 Haroon Chaudhry, senior, running during a meet earlier this season.

The Owls are currently ranked first in the East Region in the USTFCCCA poll and 21st nationally.

“Being ranked first in the region should give us an automatic bid so we shouldn’t have a problem with that,” Nill said. “Looking at how we raced in the conference meet and how the other teams raced it’s pretty much just a three team race.”

Getting this far in the season with such a high ranking and an eye on the national meet, the squad has deeply relied on team chemistry.

“For cross country we all pretty much train together. We have the top-six guys all doing stuff together and I think there’s three [training] groups total out of everyone,” Lebeau said. “It’s based on the capabilities we have as of that moment and they can change.”

The way the team has shaped up has also been in large part to the coaching from the entire staff but specifically with Nill leading the charge on cross country, handed down from head coach John Wallin after Nill was hired.

“He said ‘you gotta make a cross country team’ and gotta start from nothing and make it a regional contender,” Nill said. “John [Wallin] was the cross country coach for a little while and from day one he told me I just had to figure it out but he’s helped me along the way. We’re just trying to get that national ranking up more. Once you get an established program everyone knows the name.”