Taking out yet another loan to pay for school is a prospect that Diane Lazarus, junior journalism major, has tried to avoid — but with the approved 4.8 percent increase — she said she doesn’t have much choice.

“We are constantly renovating buildings that most of us wont even be at SCSU to enjoy and every year tuition goes up but yet we still aren’t getting good food or decent Wi-Fi in the dorms. So what exactly are we paying more for?” said Lazurus. 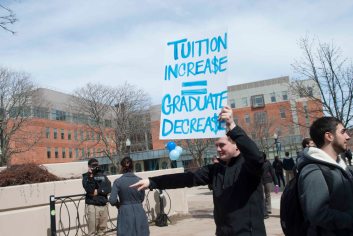 This most recent increase in tuition will cost students an additional estimated $500 per semester. Hundreds of SCSU students voiced their frustrations during a rally that took place to protest the tuition increase on March 25.

Alicia DiVito, President of Student Government at SCSU, said this is the biggest increase in tuition that she has seen at Southern and thinks the effects will be more negative than positive.

“We’re going to continue to see budget cuts and were going to see student services lost,” said DiVito. “Southern has a very specific market and is known for being more accessible to students and I think that this upward trend or increase in tuition will make this less true. The system said they were committed to increasing enrollment and retention rates, but the increase in tuition is doing the opposite.”

According to statistics on Southern’s website, enrollment rates have already moved in a downwards trend. From 2013 to 2014 there were 1.7 percent less full-time students enrolled at the university. 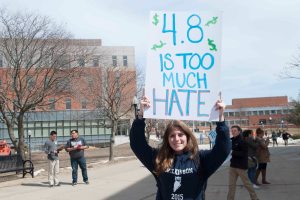 The 4.8 percent tuition increase will cover less than half of the $48.6 million dollar gap created by the budget cut which means students will be paying more but getting less, according to Sarah Greco, a graduate student who controlled the megaphone during SCSU’s rally. She said that the tuition increase is a result of the state attempting to fill the gap created by the budget cut.

There is currently a hiring freeze in place, which Greco said is one of the ways universities are trying to save money to help fill that gap. She also said while the state’s support decreases and the price of school expenses (cost of personnel, electricity, etc.) increases.

“Were going to be facing another 12-15 million dollars more that we still have to find after cutting tuition and having a hiring freeze,” said Greco.

Dr. Gregory Gray, President of the Board of Regents, said there’s actually an additional $27 million that CSCU will have to come up with, which could potentially mean more “workforce reduction.”

According to the Board of Regents website, the budget for state universities is projected to increase by another 5.5 percent next year.

Chris Piscitelli, Director of Judicial Affairs, said he disagrees with the state continuing to tax students to solve the “bigger crisis at hand”.

“Students are the ones who will become the economic force of the state in years to come, so to tax them as opposed to looking for creative ways for the state to fund higher education at the level it requires just doesn’t seem efficient. As the state continues to decline its support, the amount of money funneled to any of the 17 Connecticut institutions also declines. There’s no way to reconcile state funding going down so we have to petition them to fund higher education.”

Piscitelli said he supports any cause that will help to avoid any further burden being placed on the students or their pockets.

Lazurus said knows many students that are being forced into positions of wondering how they are going to be able to afford to finish school and graduate.

“I have to try to figure out what I’m going to do now,” said Lazurus.

Students are planning to rally at the state Capitol on April 29, the day before the legislative budget committee’s deadline to vote on a budget.

Greco said the importance for students to advocate for themselves is higher now than it has been in the past.

“If students stand up and say ‘We care and are investing our education so please invest in us’ it will make a difference,“ said Greco. “The Board of Regents has been working with Campus Presidents and their Chief Financial Officers to figure out how they can increase their savings so they’re trying to not spending money on things they would normally spend. At the end of the day, saving costs on campuses usually effects students, whether it be shortened library hours, or fewer tutors, or even student workers. It’s not even about the Board of Regents either, they have to deal with what they’re given by the state. While they advocate, they can only do so much. They are one system office, one group of professionals. We are 90,000 students and we can make a difference.”