Posted on October 16, 2019 by Southern News Leave a comment 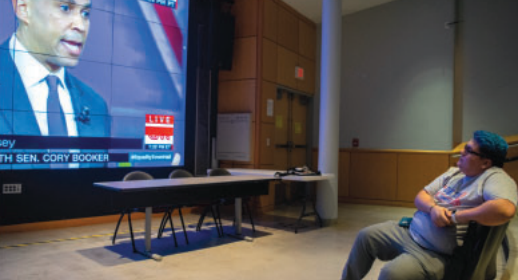 he room as members of the College Democrats ceased their conversations about the LGBTQ+ Town Hall to give their full attention to the audience member who interrupted California Sen. Kamala Harris.

That was just one of the many notable moments that occurred at the College Democrats hosted watch party. The LGTQ+ Town Hall hosted by CNN and the Human Rights Campaign Foundation, which featured nine of the candidates answering LGBTQ+ related questions.

The President of College Democrats Justin Gendron, a junior said he loved the LGBTQ+ Town Hall because he loved candidates speaking about issues that pertain to him, as a gay man.

“It’s really good to hear what their candidates’ plans are so that later,” Grendron said, “if they become the nominees, we can hold them accountable to that platform.”

Former Vice President Joe Biden was considered by some as one of the worst candidates at the Town Hall.

Grendron said he had issues with Biden’s factual inaccuracies that hinted an inadequate LGBTQ+ knowledge that can be easily Googled.

“College Dems did a LGBTQ+ quiz earlier in the semester, and one of the questions that we had was ‘What was the first country to legalize same sex marriage?’” Grendron said.

Grendron said that when the demonstrators came about, it was a good opportunity to bring up trans related topics to those watching from home.

“Hearing that in the news cycle will help some kid out in Ohio or Wyoming who is trans or is questioning to know that people care,” he said.

Political science major, Nicholas Alexiades, a senior said that the candidates used the interruptions as a teachable moment to shine light on an issue that rarely is spoken about. “[The candidates] were really, I think they were able to they embraced the protests and they were able to elaborate in that way even though it was unexpected perhaps,” he said.

Alexiades said that the protesters call to attention of trans issues elevated the issue to a level of reverence and that candidates like Pete and Harris showed respect to those who interjected during the Town Hall. Buttigieg was a recurring name that popped up with the College Democrats as many have said that he “won” the night. That may be partially because “There is no right or wrong way to be gay, to be queer, to be trans,” Buttigieg said “I hope that our own community, even as we struggle to define what our identity means, defines it in a way that lets everybody know that they belong among us.”

Political science secondary education major, Irene Machia, a junior said that she felt that Anderson Cooper was a bit hypocritical in applauding the protesters and noting the significance of stonewall. She said hypocritical because CCN moved the cameras away from them and did not give them a fair chance. Yet, she also said Buttigieg handled the interruption with class and addressed trans issues with respect.

Warren was asked what she would say to an individual who only desires marriage to be between a man and woman, her response got the College Democrats laughing.

“I’m going to assume it’s a guy who said that. And I’m going to say, then just marry one woman — assuming you can find one,” Warren said.

The College Democrats had decided to call it a night before the last few candidates had their turn, many said it was a combination of hearing from who they wanted to hear and getting late at night.