Posted on November 20, 2019 by Southern News Leave a comment 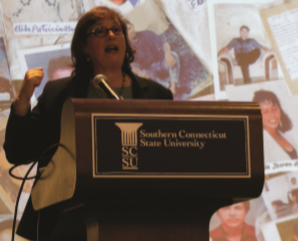 The harsh realities of immigration were presented with a conversation surrounding children who are forced to travel atop trains to avoid border officials with the reality being that they are often sexually abused, murdered or mutilated along the way.

This was the story that Pulitzer Prize-winning journalist Sonia Nazario, shared when she spoke to Southern students on Nov. 13 in the Adanti Student Center Ballroom. She discussed the journey of thousands of Central American children who travel by themselves to the U.S. border, seeking asylum.

“Immigrants bring the grit,” said Nazario. “That is what makes America great.”

Many are captured by border patrol on the way into the U.S. According to U.S. Customs and Border Protections, 859,501 people were apprehended in the 2019 Fiscal Year. As immigrants lack the right to a public defender, children are often forced to represent themselves in front of a judge which, according to Nazario, leads to deportation nine times out of 10.

Nazario said, while we should allow asylum seekers greater access to safety, we should maintain a stricter stance or those who emigrate for economic reasons, utilizing court hearings for visa and green card applications.

“I lived in a lawless country [when I was 13],” said Nazario. “You don’t want to experience that.”

There are many sides to the debate in terms of how migrants should be treated, and opinions differ on how to address it. Some commenters on the left advocate for open borders, while some on the right advocate for closed borders. Nazario said her stance is somewhere in the middle. Nazario herself is a child of immigrants, her parents having moved from Argentina to the U.S. Her father’s family previously fled Syria in 1920 to Argentina, and her mother’s family left Poland for Argentina just before WWII.

At age 13, when her father passed away, Nazario said she and her mother moved back to Argentina to find the country in a
time of political strife, as civilians, including children, were being taken away, tortured and killed by the Argentine military.

When how migrant children are treated, theater major Tashaney Johnson, a senior, said she was angered about the circumstances.

“I was hurt and really angry [about what was shown],” said Johnson. We hear about it on the news, and we read articles about it, but to see it right in front of you, it really hit me deeply.”

Communication major Alyssa Hart, a sophomore, had a similar reaction to the stories and images which were shared.

“You can’t expect little kids to advocate for themselves like that,” said Hart. “It’s really disappointing to see what our justice system has come to.”

Communication disorders major Michaela Natal, a graduate student, agreed. “I align myself more to her [Nazario’s] view than to an open border or closed border one.” While the stories shared were new to many, some knew the struggle all too well.

Psychology major Jazmyn Martinez, a sophomore, shared her grandparents’ story of emigrating from El Salvador during the country’s civil war.

“My grandmother was held by MS-13 at gunpoint trying to rob her for her car,” said Martinez. “While my grandparents were able to come here legally, many people don’t have that privilege.”