Posted on October 23, 2019 by Southern News Leave a comment 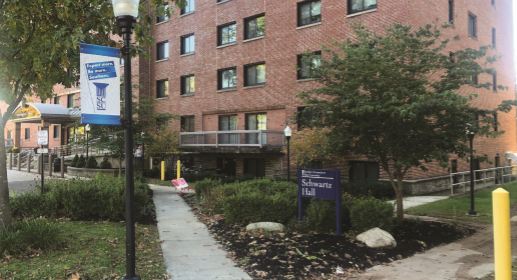 This past week Residence Life announced Schwartz Hall will be making HVAC unit repairs inside the building and will have to turn off heat to the whole building.

The repairs will fix 60 out of the 237 valves in the building. To fix all 60, they need to drain the main HVAC system, so no rooms in the building will have heat until Nov. 8, at the latest.

Robert Sheeley, associative vice president for Capital Budgeting and Facilities Operations, said the HVAC issue only directly affects 30 rooms. He also said this issue is contained to Schwartz Hall due to the age of the building, and should not be an issue in any other dormitory.

Robert Demezzo, director of Residence Life, said there were a lot of rooms in Schwartz Hall last year that were getting too hot. The only time for the work to be done is when the entire system is not in use. Therefore, the best time of the year to do the work is either in October or April.

“If they don’t fix it then, there were many rooms here that were
oppressively hot and had upper 80s temperatures. People were forced to keep their windows open even though it was below freezing, so we are trying to avoid that issue by fixing it,” said Demezzo.

In Connecticut, it typically gets colder during the nights, and residents have seen snow storms as early as November.

There is some fear from students about the rooms getting too cold during this time. However, Demezzo said he is working on getting a type of space heater unit to go into the rooms while work is being done.

Some residents of Schwartz Hall said they are apprehensive about not having heat for so long.

“It’s only frustrating when the temperatures start dipping. I don’t necessarily like having to wear two sweatshirts in my dorm room just to be comfortable, but if that’s what I have to do, then that’s what I have to do,” said special education major Meghan Davis, a junior. “It makes me nervous that they don’t expect the heat to come on until Nov. 8, because we have had snow storms before that date in the past.”

Only time will be able to tell if all the work will be done before Nov. 8 or before there is a major cold front sweeping through. If need be, the university will pause the project and put the heat back on.