Posted on November 11, 2020 by Southern News Leave a comment 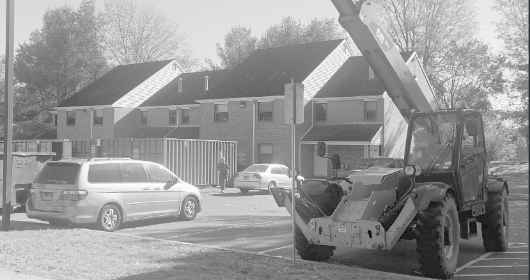 Amidst the townhouses reserved for quarantine, renovations are underway at North Campus.

The school had recently renovated the North Campus high-rise rooms with new and improved bathrooms. The next step was to give attention to the townhouses, which will be receiving new bathrooms, kitchens, flooring, appliances, cabinets and heating and cooling systems.

“I am extremely happy that we did this,” said Robert DeMezzo, Director of Residence Life.

As of right now, Townhouse Line A has already been completed. Line B of townhouses is slated to be done by the end of this calendar year. Lines C and D may be finished by the end of the whole academic year. However, things can change very quickly.

This project was not a result of COVID-19. The funding was put aside before and was funded by the Connecticut State Universities group, not directly by the school. In fact, COVID-19 actually negatively affected the project, as it postponed the projected usage of the summer to begin operations.

“If I’m assuming the best, then they’re saying if we are going to renovate them then now is the time. It’s an opportunity to do work they couldn’t otherwise do during the academic year. It’s like a restaurant that closes and says we might as well if we have the time,” said history grad student Michael Brown.

The funding from CSU greatly helped the project. If the school had the summer to put a lot more work behind the project, things would be much more farther along by now. However, the townhouses being out of commission has given more ample time.

This coming to fruition was a long overdue process but the team is very excited about how well it’s coming along, so far. The idea and budget had to all be petitioned for and then proposed to the CSU board for, funding. Then everything had to be planned and replanned based on how much the landscape has changed over the last few months.

“At least start it at a different time. We are about to be wrapping up and the cases are going up this week anyways,” said history major Daniella Occhineri, a sophomore.

Many people had to be hired for this project. One of the major groups that were hired for employment on the construction team were architects to help design the renovations.

All of this was set up and decided to complete while being used for quarantine.

The residence life team has plans to renovate many more parts of the residential buildings in the coming years. The next major move is to potentially focus more on the North Campus high-rise suites and renovate at least the whole kitchen area. There is no say when that plan would turn into a reality or even really if it will but time will definitely tell.

“We went into this project saying we need to do more than the bathrooms,” said DeMezzo.