Posted on September 23, 2020 by Southern News Leave a comment 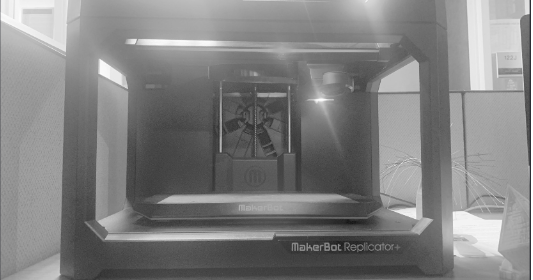 Ranging from 3D printer use, to checking out a GoPro, a range of technological amenities are available in the maker space in Buley Library.

The Maker Space is a part of the digital scholarship center. It was created to give students a place to collaborate, learn and experiment with new emerging technology.

“We’ve got tables with TVs, so if people want to work on stuff collaboratively, they can plug their computers into the TV, or they can check out our equipment and use that at the tables,” said Parker Fruehan, coordinator of the maker space. “It’s designed to be a collaborative space where people can work on projects together.”

Schools across the nation have implemented maker spaces for students.

“The Maker Space has existed in some ways since about 2016, one of the first things we got was a 3D printer so people could print out things for class work or personal use,” said Fruehan.

Along with a 3D printer, the Digital Scholarship Center website mentions that the maker space offers 3D scanners, audio-visual devices, button making, electronics, Legos and robotics for any student to experiment with.

“We have a few different Lego education sets for K-12 students or for people that are training to become teachers. They can check out these kits and take them to classrooms,” said Fruehan.

Some students did not know the library had a maker space but believe it can be beneficial to students.

“We get people varied week to week, some weeks we’d get a handful other weeks we wouldn’t get many people because there is a lack of knowledge about this space and what we are trying to do here,” said communications major Leo Palumberi, a junior.

Accounting major Lillee Olsen, a junior transfer student, said she was not aware of the space but came from a school where there were multiple maker spaces.

“I think that having a Maker Space on campus is a great idea,” said Olsen, “I know that having access to this space really helped just with all of the things that were available to use. Even though it may be costly, I believe that it is a great investment for students in the long run.’’

Out of all the items found in the Maker Space, Fruehan said the main one used is the 3D printing. It takes several hours to print something, so students send in the file they want printed and Fruehan or Palumberi will print it out for them.

“Right now, the service is free. We don’t charge students for any of it. We may decide to charge later if the material fees get to be too much,” said Fruehan.

The Maker Space is located on the ground level of Buley Library and any student or staff can check out or use any of the equipment located in the maker space.

“It provides a learning opportunity that they may not get in any sort of class,” said Fruehan, “if a student wants to experiment with some sort of new emerging technology, the maker space is where you would go to do that.”