Posted on November 15, 2019 by Southern News Leave a comment 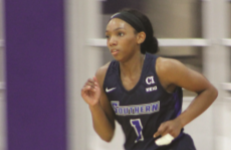 After a weekend of success for the Owls’ women’s basketball team that featured an opening night win and their senior star breaking the thousand-point barrier, a 100-51 blowout win over the Bears of Bloomfield College was icing on the cake.

The Owls opened their season in Bridgeport for the sixth straight year in the annual Bridgeport Conference Challenge, sweeping the weekend for the second straight season as they knocked off the host, University of Bridgeport, 71-55 in the opener on Saturday.

“I’m certainly happy with the effort,” said Owls head coach Kate Lynch. “There’s a lot of things that we need to work on, but I think we made adjustments when we needed to make them. I’m proud of the effort.”

Though the Owls saw a closer affair in game one against Bridgeport, even trailing 38-37 at halftime of that game, Sunday’s game against the Bears was all Southern. The offense got going early off multiple baskets inside and in transition from senior forward Kiana Steinauer and a trio of threes from redshirt freshman guard Alexa Kellner.

“Just to try and knockdown shots,” Kellner said of her mindset. “And to
get the ball, shoot, get open, get open looks and get other people open looks whenever I had the opportunity.” Kellner, who got the start in both games, made her collegiate debut for the Owls, finishing with 13 points and five rebounds on the night.

For her coach, she said it was Kellner’s confidence that impressed her most in the opening games.

“She started to get a little more comfortable yesterday,” said Lynch. “And then today you saw that confidence kind of come through. We know that she can shoot consistently for us like that, we just need her to have that confidence in herself.”

The Owls saw themselves leading 25-14 after the first quarter, and from there, they took off and never looked back. Southern went to the locker room stretching that 11-point lead into a 54-30, 24-point lead at the half, led by 11 points from Kellner and a perfect 3-3 shooting from forward Jessica Fressle, a junior.

“We’re a fast-paced team,” Lynch said. “We’ve got to go-go-go right away, when we don’t do that right away we’re not at our best, so we’ve really been trying to focus on the beginning of the game, the first five-minutes are really important to us and to the game and how we want it to go.”

Southern’s defense also stood strong on the night, as they never gave up more than 16 points in a single quarter, including limiting the Bears to just six points in the fourth and holding them to 18 made field goals as a team on the night.

However, it was the Owls’ offense that was clicking on all cylinders from the get-go, as they shot 36-64 as a team and saw all eight players score, six reaching double figures.

“We really work hard on our offense in practice,” Steinauer said. “Our team is doing great and we’re always working so hard, we’re pushing each other in practice and games, everyone’s learning the plays and just ultimately I think everyone’s doing a great job on offense and everyone is working really hard.”

Steinauer finished the evening with 15 points and six rebounds. With her leading the way on the low block, the Owls outscored the Bears 44-12 in points in the paint, and 11-4 in second chance points.

For Steinauer, the weekend carried some extra weight, as she reached 1,000 career points in game one against Bridgeport.

“I thought that was awesome,” Steinauer said of the milestone. “A great tribute to me, I guess, and everyone that’s helped me get to this point. My teammates, my coaches, friends, family, it was great, and I couldn’t have done it without them, so it was awesome.”
Senior guard Imani Wheeler led all scorers in the game with 20 while also dishing out six assists and grabbing four rebounds. For the Owls, it was their first time putting up 100 points since Dec. 14, 2014, when they put up 100 in a win against Post, before Kate Lynch took over as head coach.

Up next, they will host Queens College in their home opener at Moore Fieldhouse on Wednesday, Nov. 13. Steinauer said the end game goal is a chip.