Posted on October 20, 2019 by Southern News Leave a comment 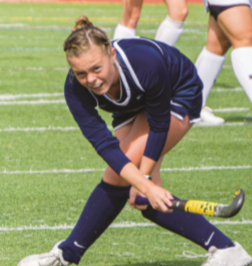 After claiming a 4-1 victory over Molloy College, the field hockey team can finally rejoice in breaking their two-year losing-streak.

The Owls entered this game coming off a closely fought overtime loss against Mercy College. Straight out of the starting gates, the Owls pushed the ball aggressively. Southern’s offense continuously controlled the ball, keeping the action on the Lion’s side of the field.

“I think in the first quarter, we came out ready to play,” said head coach Kelley Frassinelli. “I think a lot of times we are kind of sitting back and just reacting to what’s happening, and I think we just kind of stepped out and decided we were going to take charge and play what we’ve been practicing this past week.”

While the Lions were not able to get a shot off during the first quarter, the Owls were able to get three. One of these shots, a drive through the middle with less than 30 seconds left from forward Karley Welles, a junior, found the back of the net and gave Southern a 1-0 lead early.

After the Lions bounced back aggressively and were able to score a goal in the second, both teams seemed evenly matched throughout the rest of the half. Both sides were able to go on fast breaks but were unable to finish when it mattered.

Coming into the second half, the Owls pulled away from Molloy with a burst of scoring. The first goal of the quarter came from forward Janelle Ward, a freshman, who had only scored once before this season. Ward got a rebound from a blocked shot and quickly put it in the net with 14 minutes still in the third.

The second goal of the third quarter of play came from midfielder Jessica Maier, a junior, who sent a rocket-shot into the back of the net about seven minutes later. Going into the fourth quarter, the Owls were ahead of the Lions 3-1, looking confident and collected as the team entered the last quarter of the game.

In the final period, Southern sealed the game with a final goal scored by forward Ellie Craft, a sophomore, after getting an assist from Welles with just over eight minutes left in the game. Frassinelli said she credited the scoring burst in the second half to all the hard work and maturity the team has shown over the seasons.

“I think it’s just what they’re doing out there; they’re the ones. We give them the tools, and it’s game day — they have to make it happen,” said Frassinelli. “It’s the work that we’ve been doing and then they make those connections, and I think that builds on the next connection.”

With this win, the Owls broke a losing streak that stemmed back to Sept. 20, 2017 and spanned over 39 games. Frassinelli said her focus was on team success and improvement, rather than streaks or circumstances.

“It feels good to win. I don’t think I think about the streaks; I think about what we do day-to-day,” said Frassinelli. “My thing is, I want them to play well, and if we play the best game we can and we lose that game, that’s okay with me.”

Welles, however, said the team was ecstatic, even though they knew a win would come their way eventually.

“We knew [a win] was coming, it was just a matter of when,” said Welles. “We work hard every day to get here and it feels great.”

Going forward, the Owls take on Pace University on Tuesday, who are not out of the realm of possible wins given their 1-10 record.