Posted on October 19, 2019 by Southern News Leave a comment 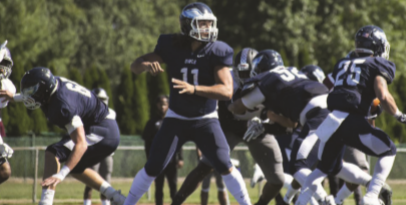 While the men’s football team has been plagued by slow starts in its first four games, this was not the case on Saturday, when the Owls trounced Franklin Pierce 55-27.

The Owls came out ready to play, putting up 28 points in the first quarter alone, while allowing no points on the defensive side of the ball.

They were able to extend their lead to 35-0 in the second quarter before allowing Franklin Pierce their first points of the game. By the time halftime rolled around, the Owls were enjoying a comfortable lead of 35-7 Running back Jonmichael Bivona, a sophomore, had a big first half, as he was able to punch it into the endzone twice, and once again in the third quarter.

“I had a huge push from the offensive line, got to give credit to those guys,” said Bivona. “They came out and they played hard, we worked all week on getting a good push up front and it happened this week.”

Bivona finished the day with 70 yards on 15 attempts — an average of just over 4 yards a carry — and scored three touchdowns.

Bivona was not alone when it came to the successful rushing attack, as Southern had nine players with at least one rushing attempt, totaling 209 yards on 43 attempts.

Quarterback Jackson Ostrowsky, a true freshman, performed at a high level, completing 14 passes on 22 attempts — a 63 percent completion rate — and putting up a total of 267 yards and two touchdowns. In his second start of the season, Ostrowsky seemed comfortable under center and made sure to credit his teammates on the big win.

“Like I said, the O-line gave me the time and opened up holes for the running backs.”

The offensive line did play with a big push, only allowing a single sack on Ostrowsky, giving him the time he needed in the pocket to scan the field and make throws before he was pulled in the second half.

The receivers were able to get open. Receivers Julian Chung, a sophomore, and Izaiah Sanders, a redshirt sophomore, both eclipsed the 100-yard mark on the day, hauling in 131 and 117 yards respectively.

Chung was able to score his first points of the season and did so twice with two reception touchdowns.

Head coach, Tom Godek credits the low amount of penalties to maturity and emphasized humility to the team after the game.

“I told the guys, ‘there’s never a bad win in football,’” said Godek. “I asked them to be humble and show humility, as, moving forward, we have more experienced, disciplined teams coming up on the schedule that will need our full attention in order to get a victory.”

Letters of encouragement and remembrance decorate a door and wall of Pelz Gynmasium. On Dec. 4, faculty, friends and students gathered in Pelz for a memorial celebrating the life of Melanie Coleman, who died on Nov. 10 after sustaining a fatal injury during gymnastics practice. 📸: Izzy Manzo
A #BehindTheScenes look at the models of @facemodels_scsu getting ready to put their best F.A.C.E. forward for the Fall Fashion Show! Be on the look out for out Nov. 20 edition of the paper featuring photos by students in Prof. Jonathan Elmer’s JRN 270 class! 📸: Izzy Manzo
Spanish major Gabriela Vasquez poses with some of her artwork that was on display during Pulitzer Prize-winning journalist Sonia Nazario’s keynote speech about her book, “Enrique’s Journey.” 📸: Izzy Manzo
Award-winning journalist, Sonia Nazario and author of “Enrique Journey”. Speaking at Southern as part of Social Justice month. 📸: Jacob Waring
Happy Halloween from the Southern News! 🎃 Copy editor J’Mari Hughes interviewed computer science major Kalem Bettencourt, a freshmen, during the Anime Society’s Cosplay Café on Oct. 28 #BehindTheScenes 📸: Izzy Manzo
Southern News’ Managing Editor @jessguerrucci handing out newspapers to trick-or-treaters as part of Commuters Trick-or-Treating. 👻 🎃