Posted on September 25, 2019 by Southern News Leave a comment 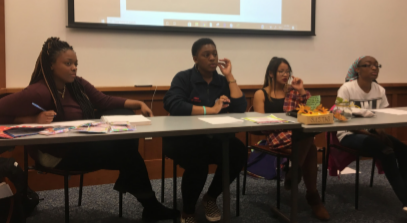 With welcoming smiles and ice breakers, Sisters in School Together Achieving Success pick a topic each week and have open discussions with their members about it during their meetings.

They described themselves as the older sisters of Southern and are willing to contribute their knowledge to anyone that needs their help. Although their audience was mainly first-year minority students, the club was welcoming to new members willing to learn about its ideals.

“When I was an undergrad student I didn’t have a lot of females of color on campus that I can look up to or confide in and I wish I did,” senior secretary of SISTAS, Rachael Ellis said. “Now I feel confident enough to have certain kinds of conversations which is what I’m most excited about.”

Before each meeting starts, the officers make sure each member feels welcomed by playing music from the 2000’s and writing positive notes to deposit into the SISTAS box.

The SISTAS boxes could be found in women’s restrooms around campus and are identifiable by the two sunflowers on top, accompanied by a handwritten note that reads, “take one.” The notes included motivational words for someone who may have had a rough day.

“At a school like Southern, most of our population is diverse and it’s nice to see us–women come together because it makes me feel comfortable,” senior vice-president of SISTAS, Halley Shambra said. “SISTAS is a group of women that support each other away from home or family and we always have good conversations. Sometimes it can be difficult or awkward but they’re always necessary.”

SISTAS is not only empowering women at Southern, but is also inspiring other young females, for example, the girls at Ansonia High School. This mentorship program was proposed and initiated last year but will be continuing this year due to a personal request via email from Ansonia’s principal.

SISTAS will commute to the high school for monthly visits and will have constructive conversational topics that will benefit the future of Ansonia’s girls.

“The principal of Ansonia High School was excited about continuing the program because even though we are young, we’ll be able to impact these young females with things they don’t know,” senior president of SISTAS, Denisha Marshall said. “Collaborating with other organizations won’t only get us new members but it’ll allow us to deliver our message of conquering women empowerment through sisterhood.”

Aside from their weekly meetings, the executive board of SISTAS get
together separately and discuss which topic they will decide to cover. The first topic they addressed was women’s health and that allowed the SISTAS to connect with their members through PowerPoints, videos, and games.

SISTAS advised its members on different ways Southern can help enhance their personal health. They provided information from the wellness center and other facilities on campus that are designed to help the student body both physically and mentally. Each member left the meeting with goodie bags that included condoms, candies, and informative pamphlets.

Through sisterhood and positivity, SISTAS will continue to empower younger women on and off campus by passing on its motivational essence. Either collaborating with other organizations or speaking on important topics their mission is to be role models to the community.

“Spread positivity because that’s really all you can do,” senior treasurer of SISTAS, Maya Neal said. “We’re all kind of going through the same stuff. We’re all in college so we already have one.”

Happy 2020! Come to Adanti J. Student Center room 225 on Mondays at 1 to join the Southern News! All are welcome!
Letters of encouragement and remembrance decorate a door and wall of Pelz Gynmasium. On Dec. 4, faculty, friends and students gathered in Pelz for a memorial celebrating the life of Melanie Coleman, who died on Nov. 10 after sustaining a fatal injury during gymnastics practice. 📸: Izzy Manzo
A #BehindTheScenes look at the models of @facemodels_scsu getting ready to put their best F.A.C.E. forward for the Fall Fashion Show! Be on the look out for out Nov. 20 edition of the paper featuring photos by students in Prof. Jonathan Elmer’s JRN 270 class! 📸: Izzy Manzo
Spanish major Gabriela Vasquez poses with some of her artwork that was on display during Pulitzer Prize-winning journalist Sonia Nazario’s keynote speech about her book, “Enrique’s Journey.” 📸: Izzy Manzo
Award-winning journalist, Sonia Nazario and author of “Enrique Journey”. Speaking at Southern as part of Social Justice month. 📸: Jacob Waring
Happy Halloween from the Southern News! 🎃 Copy editor J’Mari Hughes interviewed computer science major Kalem Bettencourt, a freshmen, during the Anime Society’s Cosplay Café on Oct. 28 #BehindTheScenes 📸: Izzy Manzo