Posted on September 9, 2020 by Southern News Leave a comment 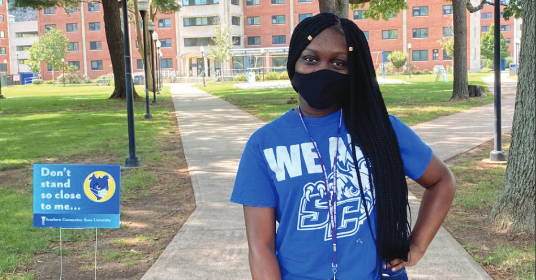 The death of multi-award-winning actor Chadwick Boseman was an event that was felt through many communities around the world, the Black community especially.

“The death of Chadwick Boseman has impacted the black community – because he was one black actor that was on the come up and really contributed to a referable movie; “Black Panther,” said public health major Randall Rissing, a graduate student.

Boseman’s death came as a surprise to many as he did not share his struggle with colon cancer to anyone outside of his family.

According to social work major Amoy Austin, a freshman, the death of Boseman has left his audience to reflect on how they conduct their everyday lives.

“It is making us think more about how our lives are supposed to be,” said Austin. “If something is going on in your life, you have to speak up because you never know what can happen.”

For Rissing, Boseman’s death made him reflect on his own health.

“The death of Boseman has impacted me due to hearing that he died from colon cancer,” said Rissing. “Black Men are at a higher risk of developing colon cancer – so in perspective this was a wakeup call to take one’s health serious.”

From his early television roles in shows such as “Lincoln Heights” to more historic roles such as Jackie Robinson in “42: The True Story of an American Legend,” Boseman filled whatever role he was in.

However, his biggest role came from when he played son T’Challa in the 2018 record breaking movie Black Panther.

The film became the top-grossing superhero film of all time in North America, becoming one of only seven films to earn $600 million or more according to the Hollywood Reporter. It also gave the Black youth – both boys and girls – much needed positive representation.

“He taught them to have strength and to speak up for what they are and who they could be,” said Austin. “He taught me to always love my culture and who I am.”

English major Maaliyah Burgess, a sophomore, said the death of Boseman will be one the black community will grieve forever as he inspired many people.

“When people see him and ask about him, they will be impacted by the loss that the Black community had,” said Burgess.

Some such as Rissing are hopeful that more positive roles will arise giving the Black youth someone more positive to look up to in the community.

“I would say that Boseman has set the bar high, but I am very hopeful that the legacy of black men in comics will continue to prosper,” said Rissing. “I hope that more men will stray away from acting in violent roles and be inclined to pursue protagonist roles in film.”

According to Britannica, the Black Panther was one of the first Black comic book heroes in the United States; making its first appearance to the public in July 1966. However, Boseman brought the character T’Challa to life.

“Power. That is the biggest adjective I can use,” said Burgess. “There was a lot of culture in the movie it was rich and the people and the characters in the movie they were firm in what they stood for and proud of who they were essentially.”

Boseman’s roles will continue to live on with the help of his fans and family.

Rissing said the most important lesson people can take away from Boseman is “strength is needed no matter challenges is faced.”

“To take health serious, and to follow one’s passion,” said Rissing. “I believe this unfortunate event has really woken up the black community – to not be complaisant and aim for the stars.”