Posted on March 10, 2021 by Southern News Leave a comment 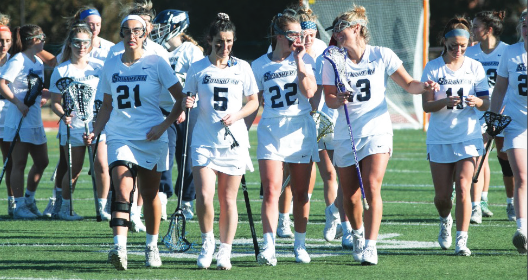 A competitive spring season for women’s lacrosse is on the horizon, as COVID-19 protocols put in place by the university have proven to be effective enough to let the programs compete.

Their first game is fast approaching, set for Wednesday, March 17 at Jess Dow Field, and the Owls will be facing Elm City rival University of New Haven to kick off the season.

“We’ve been training kind of more like a football mentality, getting in shape and then rep the plays kind of thing, because we need to,” said Head Coach Keven Siedlecki. “I feel like we’re in pretty good shape now. We just had three full days of practice where we actually played against each other and that really exposed where we still need to work.”

The team’s preseason has been unorthodox compared to prior seasons. The protocols in place to slow the spread of the virus does not give the full freedom experienced in the past. In response to this, Siedlecki emphasized the conditioning aspect of training in the beginning phases of practice, since they could still train at a high level for it.

“Overall, I think it’s worked out well in terms of our conditioning numbers,” said Siedlecki. “Our fitness test numbers are actually far better then they’ve been in the past, part of that is our great class of 12 freshman.”

In years prior, Siedlecki said the average number of athletes on the team was around 17 and a class of 12 first-year students will add a level of depth to the program.

“I saw the team when my older sister was a part of it, so I’ve seen the program from a fan perspective and now as a player. I’ve seen how much it’s changed and size of the team is one of the biggest differences,” said team captain Bayleigh Takacs. “We have seven more girls on the team than we did last year, which is awesome because it means more teammates, more fresh legs on the fields, and more players to rotate in.”

Since becoming head coach in 2019, Siedlecki has been trying to change the culture and implement a mentality that a winning program should have. He had high praise for the captains of the team.

“They bought in so much to what I want to do with the program. They are the liaison between me and the rest of the team,” said Siedlecki. “We have a large roster now, I’m the only full-time coach so with a roster of 26, I can’t keep track of everybody, every day. They are responsible and have really stepped up to make sure everyone’s doing okay. I couldn’t have asked for better leadership in this situation.”

The Owls went 2-15 during the 2019 season and showed a small sample size of the progression they’ve been able to make during the shortened 2020 season.

“There’s no question in anyone’s mind that we’re moving in the right direction. It’s just about progress,” said Siedlecki. “The older girls understand that no one is expecting to win a national championship this year or next year. Those kind of expectations are not there. But the freshman class is really ambitious. We continue to recruit classes behind them that are just as good and turn this program into a competitor.”