Posted on September 11, 2019 by Southern News Leave a comment 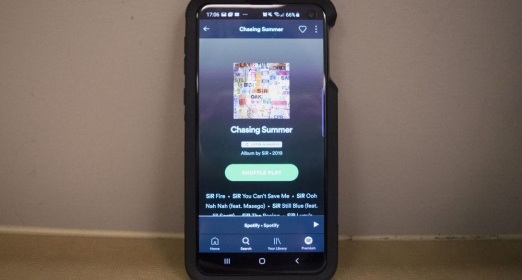 The 14-track album is not chasing anything as it places you back into those steamy summer days and unforgettable summer nights.

The album includes features from artists such as Smino, Lil Wayne, Jill Scott and the one and only Kendrick Lamar.

“Chasing Summer” is a complete 180 from SiR’s previous album “November” as many thought it lacked emotion while displaying a surplus. For instance, in his song That’s Alright” SiR sings, “All her little friends can’t stand me, because they know I would trade her love for a Grammy.”

Seeing how the majority of his audience is female, there is no surprise that “November” did not do too well on the charts because of its knock on committed relationships.

“Chasing Summer,” on the other hand, seems as though SiR has finally stepped into his skin, and I am here for it.

“I was in the wrong place in the wrong time with the right one.” A major reoccurring theme in the album is timing, and in this track SiR’s time ran out.

SiR manages to connect not one, but two sitcoms into “Chasing Summer.” The first one being “King of the Hill” in track two, “John Redcorn.”

This jazz track has even moodier lyrics and an airy tone continuing the theme
of failing relationships while introducing a new one, loneliness. The theme of loneliness is communicated not only in the lyrics but in the title.

As seen in the sitcom, John Redcorn is in love with a married woman
who breaks their affair to be fully devoted to her husband. “Guess I shoulda stayed where I belonged, cause once you make it back to your happy home. I’m alone.”

“La Lisa,” featuring Smino, highlights the thrill and threat of being in love in high school, the number one obstacle seeming to be the fathers of the women the men are trying to pursue. These hardships can relate to a lot of high schoolers today, which is reflective in its popularity.

“Get a little ratchet, stay over color, your box. Don’t tell your daddy, he might go Crayola.”

“Fire” is a smooth transition from “John Redcorn” as SiR seems to find a cure to his loneliness, even if it is albeit a temporary one. “We both know this house could never be a home, but ain’t you sick of spending all your nights alone?”

SiR is trying to pursue and romance these women at the same time while making sure not to overstep in the process. This smooth and soulful track gives a sense of promise. This warm, cozy and romantic track is simply fire.

Although there were many hits on this album, there were also some songs that did not flow with the album or provoke any type of positive movement for the album’s mood.

The main one being track seven, “Lucy’s Love.” It is the second track on the album centered around a sitcom. CBS sitcom, “I Love Lucy” was in mind during
the production of this track, focusing on the many adventures of the couple.

The track features Southern rapper Lil Wayne who is known for his lazy rapping. However, Wayne proved this stigma as he was almost in slow motion, off-beat and without direction.

The track would have been better without him on it. The message was delivered through the drums and slow tempo, and although the vision for the track was clear, Lil Wayne blurred it.

However, the award winning track on this album has to be track number one, “Hair Down,” which features Compton, Ca., native, Kendrick Lamar.

This track reminds me of driving on a warm, summer day with all the windows down with confidence radiating more than the summer sun. This track has a never-ending bounce, the beat never stopping, rather slowing down and speeding up, much like the summer. With only seconds Kendrick Lamar leaves his mark and the track keeps
running, never ending, chasing summer